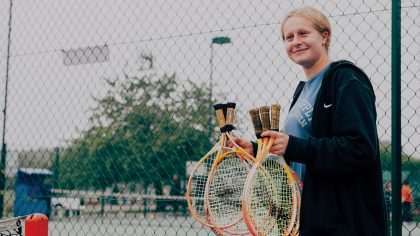 With well over half a million members, The Lawn Tennis Association has always enjoyed a strong and loyal following. So, in 2017, it rebranded its LTA membership to widen its appeal and emphasise the important role its members and support staff played in making tennis such a great and inclusive sport.

The rebrand focused on updating the membership brand’s imagery, tone of voice and overall look and feel, and convey that its success was down to a widespread team effort – from parents and grandparents to groundspeople, coaches and players; from the champions on centre court all the way through to the unsung heroes behind the scenes.

Ultimately, it centred on reinforcing the message that it’s this close-knit collaboration and behind-the-scenes support that makes tennis such a positive experience for everyone involved.

Bouncing back with a dynamic rebrand

The rebrand, carried out by another partner, features exciting dot and linear design to depict the energy and motion of tennis balls in flight. Representing the tracking and movement of the ball in this way allowed for a dynamic system that could be used across all of the British Tennis Membership marketing materials.

In delivering the project, we ensured that the new branding was used to its full potential in all artwork; creating engaging and interactive print and digital media materials that took in everything from on-court graphics to social media campaigns.

"We have all enjoyed working with you!Your attention to detail and standards of quality controlhave been appreciated."

Celebrating success with The Workers Club